An ALL NEW Edition of Classic Christmas Radio Theater is Completed!

Up to 24 hours of the greatest radio programs of all time available by BARTER in most markets, with delivery via FTP.  A non-commercial edition will also be available as well on a cash basis.  Shows may be run through January 1, 2021.

Radio stations interested in the program can use the comment form in the sidebar for more information.

Hour 2 - The Aldrich Family starring Bobby Ellis as Henry from the last season of the show, December 21, 1952,  68 Christmases ago.  Many of the scripts for the final season of the show were recycled from earlier seasons, and while Bobby Ellis wasn’t as good as Ezra Stone, nor was Jack Grimes as good a Homer as Jackie Kelk,  they both did an exceptional job in this episode entitled Christmas Eve.  Also Fibber McGee and Molly, originally broadcast December 16, 1953, 67 Christmases ago, Christmas Shopping at the Bon Ton.

Hour 5 - Suspense, originally broadcast December 21, 1958, 62 Christmases ago, Out for Christmas starring Raymond Burr.  Santa Claus has a gun and is out for revenge. He's really an ex-con out to get the rat who testified against him, and his girl who ran off with the rat! Also Suspense from December 22, 1957, 63 Christmases ago, Dog Star starring Evelyn Rudie.  All that a little girl wants for Christmas is a little puppy. She finally gets one...from outer space! Little Chipka falls to Earth from a Russian satellite.

Hour 6 - Amos n Andy, originally broadcast December 23, 1951, 69 Christmases ago.   The annual Christmas show, still wonderful, no matter how many times it's heard. Andy, broke as usual, is desperate to earn money so he can give his god-daughter a talking doll for Christmas. He convinces a manager to hire him as a department store Santa Claus on Christmas Eve. Meanwhile, Amos explains to his daughter Arbadella the true meaning of the "Lord's Prayer".  Also an excerpt of the Christmas show from 72 Christmases ago, December 24, 1942.

Hour 7 - Lights Out, originally broadcast December 22, 1937, 83 Christmases ago.  One of the few Wyllis Cooper productions of the series still available.  A Christmas story, set during the war in 1918. A French soldier, an Australian and an American Negro soldier find themselves aboard a railroad train. Have they met before? Are they wise men?   Also Fibber McGee and Molly from November 28, 1955, 65 Christmasas ago.   Just exactly what is "Secret Project X-R-5?" Hint: it's one of McGee's new inventions.

Hour 10 - Our Miss Brooks starring Eve Arden, originally broadcast December 24, 1950, 70 Christmases ago.  The Magic Christmas Tree.  A party at Miss Brooks', with a magic Christmas tree, or was it all a dream?  Also Fanny Brice as Baby Snooks, as heard during the Good News of 1939 program on December 22, 1938.  Baby Snooks and father (Hanley Stafford) go to see Santa.

Hour 11 - The CBS Radio Workshop, originally broadcast December 23, 1956, 64 Christmases ago, All Is Bright. The story of how "Silent Night" came to be written and became world famous.   Also Fibber McGee and Molly, originally broadcast Secember 22, 1953, Fibber and Molly go Christmas Tree Shopping.  It's that time of year for a visit to "Christmas Tree Marvin" for a seasonal purchase. The bargaining is long, hard and expensive!

Hour 12 - Gunsmoke starring William Conrad, originally broadcast December 29, 1957, 73 Christmases ago,  Where’d They Go.   Clint Dody has been accused of armed robbery. When Dillon and Chester ride out to arrest him, a few chores need to be taken care of first.   Also Have Gun, Will Travel starring John Dehner as Paladin, originally broadcast December 21, 1958, 62 Christmases ago. The Hanging Cross.  Paladin tries to prevent a battle between Matt Beecher and the Pawnees, caused by a small boy claimed as the son of both Matt Beecher and the Indian Chief.

Hour 13 - Lum n Abner, originally broadcast December 19, 1948, 72 Christmases ago, the Lum and Abner Traditional Christmas Program.   Since the 1930’s Chester Lauck and Norris Goff told this story in their quarter hour format.  Now, in their only half-hour version of the episode, Lum, Abner and Grandpappy Spears travel East to visit a family in need, seeking shelter in a barn...and with a young baby.

Hours 14 and 15 - Greatest Story ever Told - Three episodes of the religious program from 73 Christmases ago that tells the story of the birth of Jesus as broadcast seventy three years ago. First from December 14, 1947 Go and Be Counted. Then from December 21, 1947, No room at the inn. Finally from December 28, 1947, Flight into Egypt. The program on ABC was sponsored by Goodyear Tire and Rubber company, but no commercials ran during the show, there was no studio audience, and no acknowledgement of casts were ever made nor photos of the production taken. The program was the first to characterize Christ on the air, and was, as John Dunning put it in his “On The Air: The Encyclopedia of Old Time Radio,” ”a simple, popular dramatization of Christ’s life.”

Hour 16 - Suspense, originally broadcast December 21, 1950, 70 Christmases ago, Christmas for Carole starring Dennis Day in an uncharacteristic serious role of a bank teller desperate to raise some much needed cash for his wife by turning to a notorious criminal for help.  Also Fibber McGee and Molly, originally broadcast December 12, 1955, 65 Christmases ago,  Fibber buys a present for Doc Gamble, it's a briefcase, and it costs $22.50.

Hour 18 - The Martin and Lewis Show, originally broadcast December 12, 1949, 71 Christmasas ago, The Christmas Show. The boys get a job at a suburban resort. Madness follows, funny in spite of the mayhem. The cast does a skit called, "Love In Darkest Africa."   Also The Happy Prince as told by Orson Welles and Bing Crosby from 1945

Hour 19 - The Harold Lloyd Comedy Theater production of Bachelor Mother, originally broadcast December 24, 1944, 76 Christmases ago.  An adaptation of the 1939 Ginger Rogers romantic comedy starring Louis Hayward and Brenda Marshall.  Also an episode of Fibber McGee and Molly from December 22, 1955, 65 Christmases ago,  Fibber and Molly break into Doc Gamble's apartment to sneak their Christmas card into Doc's mail. It seems they forgot to mail it.

Hour 22 - The Abbott and Costello show, originally broadcast December 23, 1948, 72 Christmases ago.  Bud needs $10,000 in a hurry; Christmas is coming, so Bud and Lou go Christmas shopping. The show features a Sam Shovel drama, "The Case Of Clarence, The Dress Designer Who Gave Himself Up To The Police," or "I'm All Yours In Buttons and Bows."   Also an excerpt from an undated Bob Hope show where Bob indulges in a Christmas themed monologue.

Hour 23 - Rocky Fortune starring Frank Sinatra, originally broadcast December 22, 1953, 67 Christmases ago.  Rocky gets a job as a department store Santa Claus, and gets caught up in a plot to murder Santa!  Also the Treasury Star Parade, originally broadcast December 24, 1942, 78 Christmases ago.  Lionel Barrymore stars in a sketch based on Dickens’ A Christmas Carol entitled A Modern Scrooge.  Barrymore refuses to buy War Bonds until he has a visit...

Hour 24 - Screen Directors Playhouse, originally broadcast May 8, 1949, 71 years ago, It’s a Wonderful Life.  This holiday classic has become synonymous with Christmas.  Frank Capra appears as the host of the show.  Jimmy Stewart is the only actor from the original screen presentation to appear in this adaptation, though Arthur Q. Bryan does a great job as Clarence, and Hans Conried handles the classic Lionel Barrymore part as Mr Potter.

Thank you for all your support

Many thanks to all of you, Stations and Listeners alike, for making my Labor of Love so much fun.

There is good news and bad news.

The bad news is that Christmas on the Radio is no more.

The GOOD news is that I have been hired by USA Radio Network to produce more great radio programs, including Classic Christmas Radio Theater and the ALL NEW Classic Radio Theater! 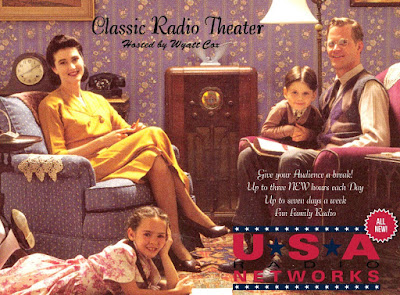 To say that I'm happy is an understatement.  The folks at the network are committed to the preservation of Classic Radio and are very supportive of our shows.

If you are a radio station and want more information, email me at classicradiotheater@gmail.com !

And thanks for listening!

When Wyatt Cox moved to Las Vegas in 1996, he was faced with the challenge of making his radio station stand out in the crowded big-industry scene. Most stations either ran reruns of their stations regular talk shows or played the same Christmas music as every other station.

With the help of a number of collectors of old time radio friends he assembled a 10 hour radio special that aired in Las Vegas for two years. When he left the station in December of 1999, he built on the concept adding a variety of programs and commentary to an 18 hour package that was syndicated to a handful of stations.

Classic Christmas Radio Theater continues to be Family Friendly spoken word programming.  Classic Radio programs featuring some of the biggest names in entertainment of the 30's to today.  Comedy, Drama, Suspense, the entire spectrum of Old Time Radio is new again to today's radio listeners.  It's the perfect Christmas show for stations with a Spoken Word format.

Classic Radio Theater is also available up to three hours a day, up to seven days a week on a Barter basis to commercial stations.

Radio Stations:  For complete information on affiliation, email classicradiotheater@gmail.com
Posted by Wyatt Cox at 5:47 AM No comments: